100% American is aware of Cryptocurrency

While to many it may seem like the latest “get rich quick scheme,” investing in bitcoin and other cryptocurrencies has made some people really, really rich. Whether they’ve used those funds to buy houses or Lamborghinis, it’s easy to be excited about the possibilities of cryptocurrencies. But due to their volatile nature, investors have also lost their new wealth as quickly as they’ve earned it.

Now that bitcoin and similar cryptocurrencies – Ethereum, Litecoin, and Ripple – have earned the attention of mainstream media and big-name investors, how should you feel about these digital denominations? We surveyed over 1,000 Americans to understand their feelings about cryptocurrencies and to break down whether excitement (or fear) is the overwhelming emotion toward virtual money.

A Bitcoin by Any Other Name 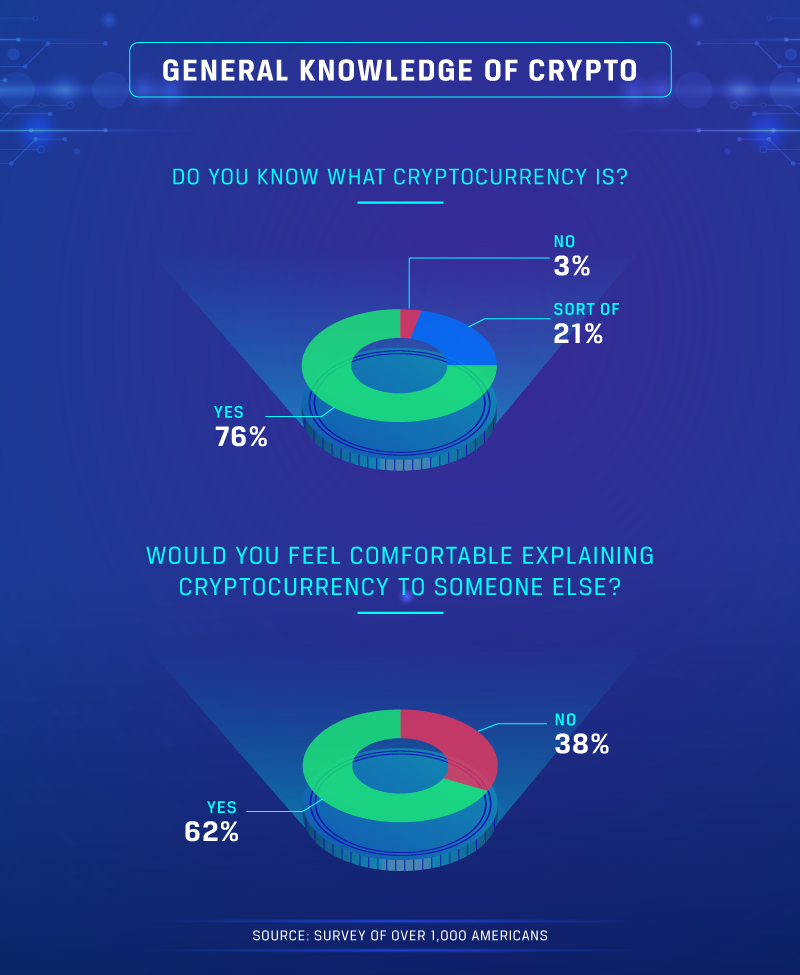 Over 75 percent of Americans feel they know what cryptocurrency is. When you factor in that over 20 percent of the remainder believes they “sort of” know what’s going on with these electronic payment methods, almost the entirety of America has at least some exposure to the concept of currency akin to bitcoins. Even some as young as 19 have turned a grandmother’s gift into a million-plus-dollar profit.

But knowing about something, especially a topic as nuanced as cryptocurrency, and being confident in your ability to teach what you know to someone else are completely different. When faced with the task of explaining cryptocurrency to others, over half (62 percent) felt assured in their ability to give a new money novice a rundown of these deregulated cyber currencies. This meant that close to 40 percent of Americans wouldn’t want to be the distribution point for those seeking a quick information session.

Tell Us How You Really Feel 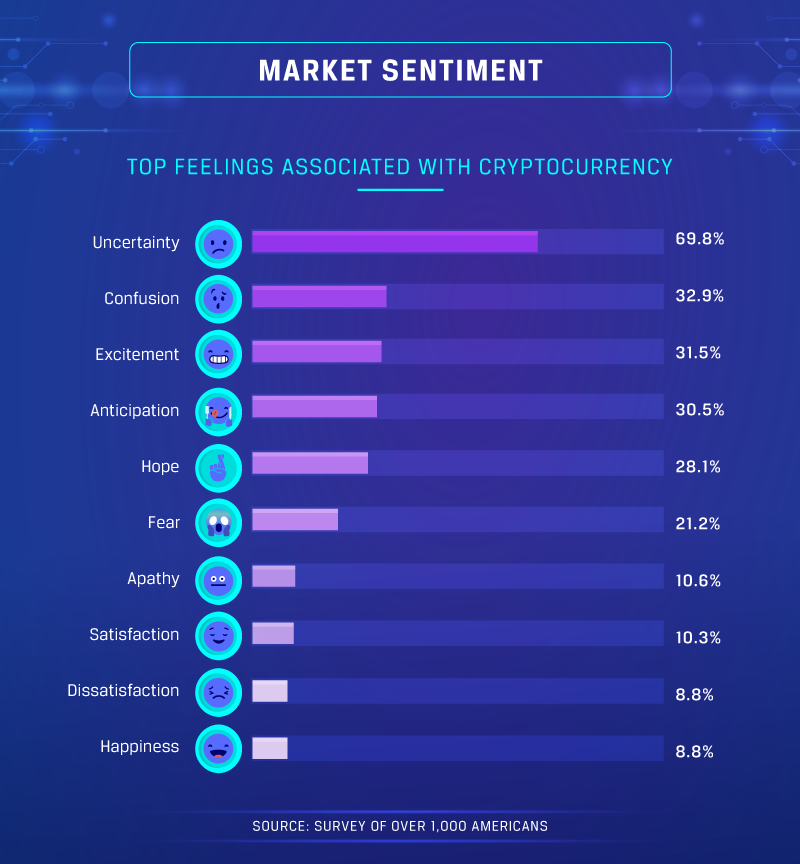 Almost 70 percent of respondents felt “uncertainty” summed up their emotions regarding cryptocurrencies. And who could blame them? Bitcoin, for instance, saw its price shoot off like a rocket into the heavens only to come crashing back to earth. Such volatility shouldn’t necessarily put investors at ease.

In fact, the Federal Trade Commission reported that Americans lost over half a billion dollars in the first two months of 2018. This may be where some of those feel “fear” toward these digital currencies. The most uncommon feeling toward the likes of bitcoin, Litecoin, and their ilk? Happiness. Perhaps this proves the old proverb that “money can’t buy you everything” is true – even in an age of bitcoin millionaires.

To Invest … or not Invest 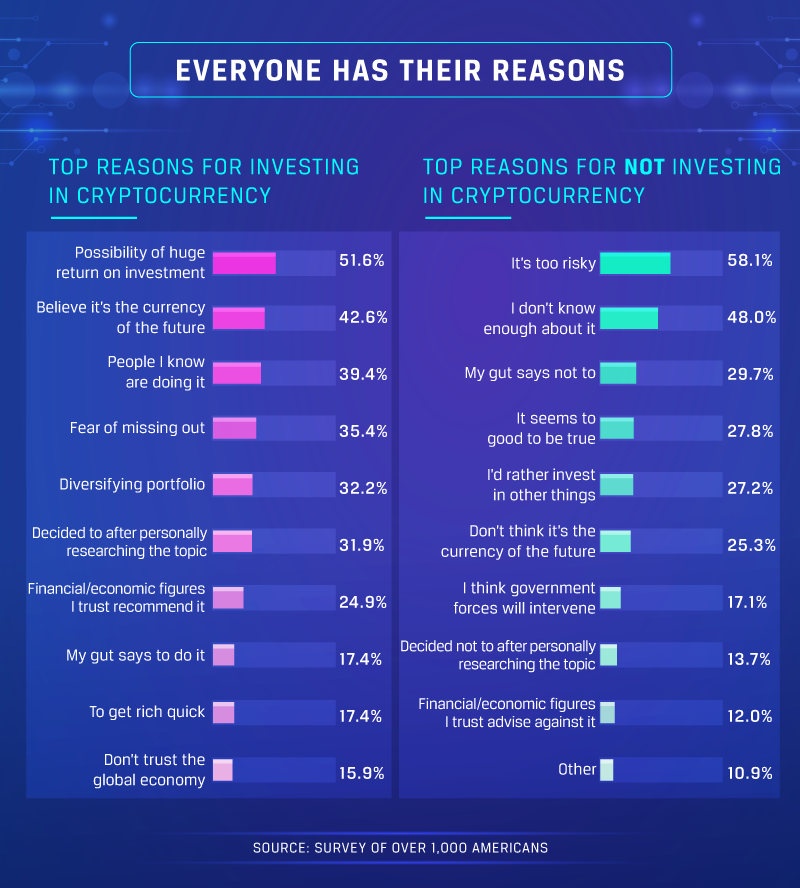 Stories of winning it big in the cryptocurrency market have made the most compelling case to the over 1,000 Americans we surveyed. Dreams of riding the bitcoin wave or possibly getting in on the ground floor of an alternative like Litecoin or Ripple could most certainly pay massive returns … if they take off. Conversely, it’s the opposite of reward – the risk – that topped the list as the number one reason why someone wouldn’t roll the dice in the cryptocurrency market.

Peer pressure may have played a part in driving many Americans to consider investing in these digital currencies. Almost 40 percent of everyone we surveyed cited “people I know were doing it” as a top reason for investing. This type of peer pressure could also be tied to the FOMO, “Fear of Missing Out,” that over 35 percent of respondents expressed as a leading reason for dabbling in the ever-growing cryptocurrency market.

Those looking to trust their gut saw it as a reason to both invest and not invest. However, that internal voice in your abdomen may do a better job convincing potential cryptocurrency investors to forgo the risks rather than take them.

The Digital Haves and Have-Nots 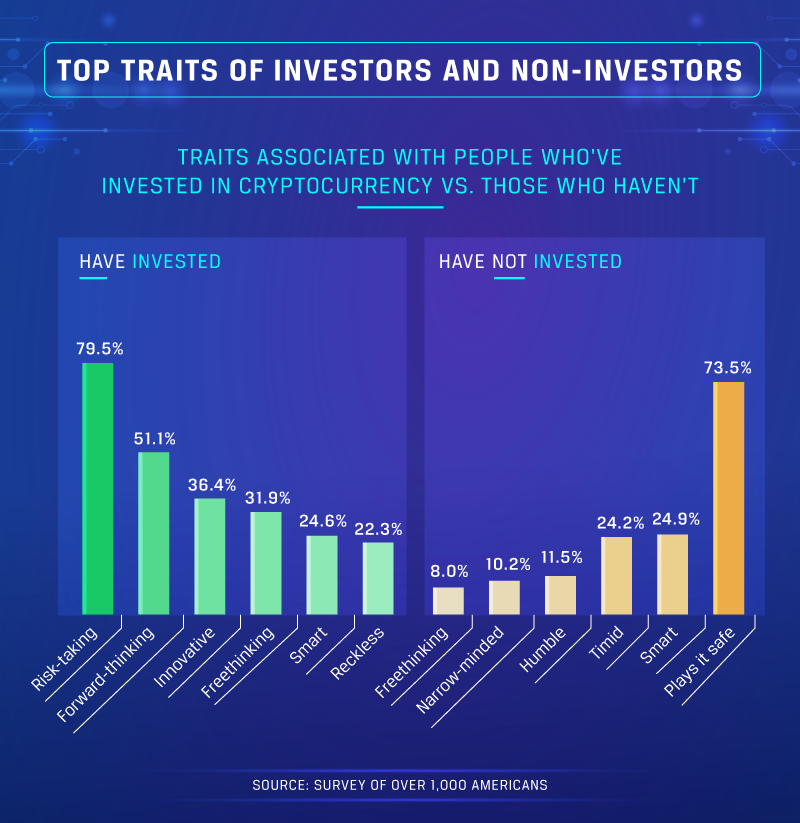 For some people, the biggest deterrent in investing of any kind is a fear that they’ll lose their money. While that fear is often linked to a lack of understanding, feeling intimidated by the prospect of investing is a primary reason some people avoid the cryptocurrency game despite bold reports of success.

It’s human to judge other people, and often times we base these judgements based on the choices people make. With this in mind, we decided to ask people what traits they associated with those who had invested in cryptocurrency vs. those who hadn’t.

Overwhelming, Americans view those who haven’t invested as having a tendency to “play it safe.” Nearly 74 percent of people attributed non-investors with this trait. Interestingly, the next most popular trait association was “smart.” About a quarter of respondents seem to believe that not investing was the more intelligent choice.

On the flip side, when asked their opinion of those who had invested, nearly 80 percent of people suggested they see banking on options like bitcoin as a positive form of risk-taking. More than half felt they’re being forward-thinking, and over 1 in 3 see cryptocurrency investment as an innovative option compared to standard stocks and bonds.

However, roughly the same percentage of respondents associated being “smart” with investors as with non-investors. Clearly, Americans are divided over what they think the future will hold for the crypto markets. 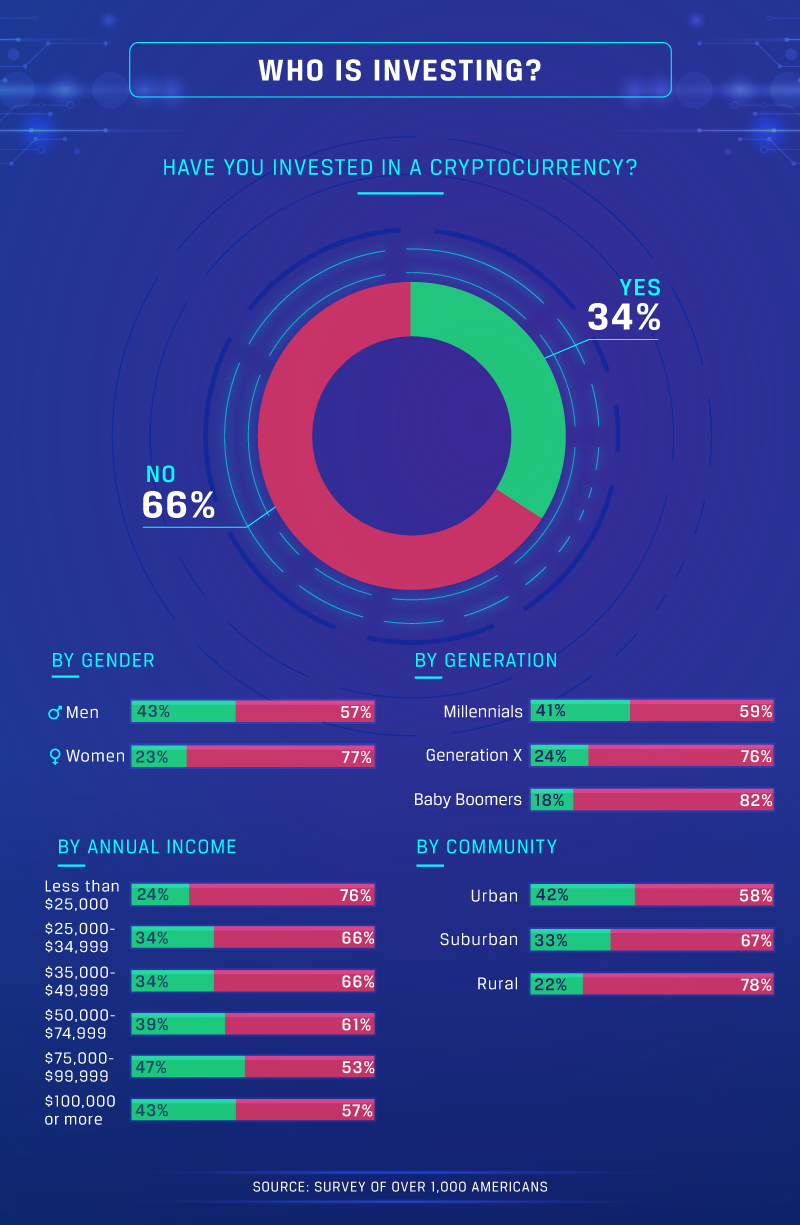 With almost 35 percent of Americans investing in cryptocurrency, it’s fair to ask: Just who is placing these investments? Is it Wall Street day traders who’ve ditched analog holdings for a digital investment portfolio? Individuals whose curiosity piqued when they heard people were paying for Lamborghinis with bitcoins? While we may not know specifics about every single investor, our participants helped us paint the portrait of the average crypto-investor.

Men are almost twice as likely as women – 43 percent to 23 percent – to have invested in cryptocurrency. But it wasn’t just gender that influenced someone’s decision to convert their Benjamins or Jeffersons into bits and coins. Income also played a big role in whether or not someone had dabbled with this new form of currency. Almost half, 47 percent, of individuals making $75,000 to $99,999 annually had entered into the markets. Less than a quarter of those making under $25,000 could swing sinking some teeth into the cryptocurrency game.

Age also plays a factor when it comes to investing in crypto. According to our results, millennials were almost twice as likely as any other generation to be crypto-investors. Perhaps that has something to do with millennials’ apparent cynicism and distrust of others. A 2014 study by The Brookings Institution published in the Harvard Business Review offered this conclusion regarding millennials, “Millennials score lower than any other generation in terms of believing that people can be trusted.”

So what does it all mean? From the results, Americans appear to be divided in opinion over cryptocurrency and its role moving forward. It’s also apparent that while many think they know what it is, when asked whether explaining it to others was feasible, fewer believed they could do so, indicating a superficial understanding.

Perhaps it shouldn’t come as a surprise that we can’t seem to make up our minds regarding crypto. While we are equally as likely to judge investors and non-investors as smart people, the most common emotion associated with the topic is uncertainty.

So, whether you are bullish on the future of crypto, cautiously optimistic, or would never consider investing, one thing is clear: You aren’t alone in your opinion. Only time will tell what the future holds for this unpredictable market.

We collected responses from 1,004 Americans via Amazon’s Mechanical Turk platform. Participants ranged in age from 18 to 80 with a mean of 36.05 and a standard deviation of 11.86 years. Hypotheses were not statistically tested, and the data presented rely on means and median analysis only.

Ready to roll up your sleeves and jump into the cryptocurrency game? Feel free to share these findings with your readers for any noncommercial use. Just make sure you link back to this page so our contributors get credit for their work too.