A survey of 3,250 consumers and 1,350 merchants conducted in Indonesia, Malaysia, Singapore, Thailand and Vietnam found that lack of personalized advice (58%), high fees (45%) and an unattractive image (40%) are the top reasons for consumers to shift from traditional banks in Southeast Asia.

This, combined with wider economic growth, growing digital penetration and the large population of unbanked, are setting a fertile ground for digital banking to thrive in Southeast Asia.

Regulators across the region are introducing regulatory frameworks and changing legislation to open the banking industry to new, innovative players, following on the path of other regions where challenger banks have grown strongly over the past years.

Since 2010, more than 200 digital challenger banks have been established globally, aggressively challenging for market share, the report says. Out of those still active, 46 are found in the Asia Pacific (APAC) region.

China and South Korea are amongst the most developed digital banking markets in the region, with leaders like KakaoBank and WeBank rapidly gaining ground. These winners have in common the fact that they are branchless, customer-focused and tech-driven, core principles that have enabled them to reach a wide range of customer segments rapidly and at scale, the report notes.

Leveraging its extensive digital ecosystem comprising a widely popular messaging app, a payment platform, commerce functionalities and more, KakaoBank has quickly risen to prominence, emerging as a notable winner amongst digital banks that served some 13.6 million customers as of the end of 2020. 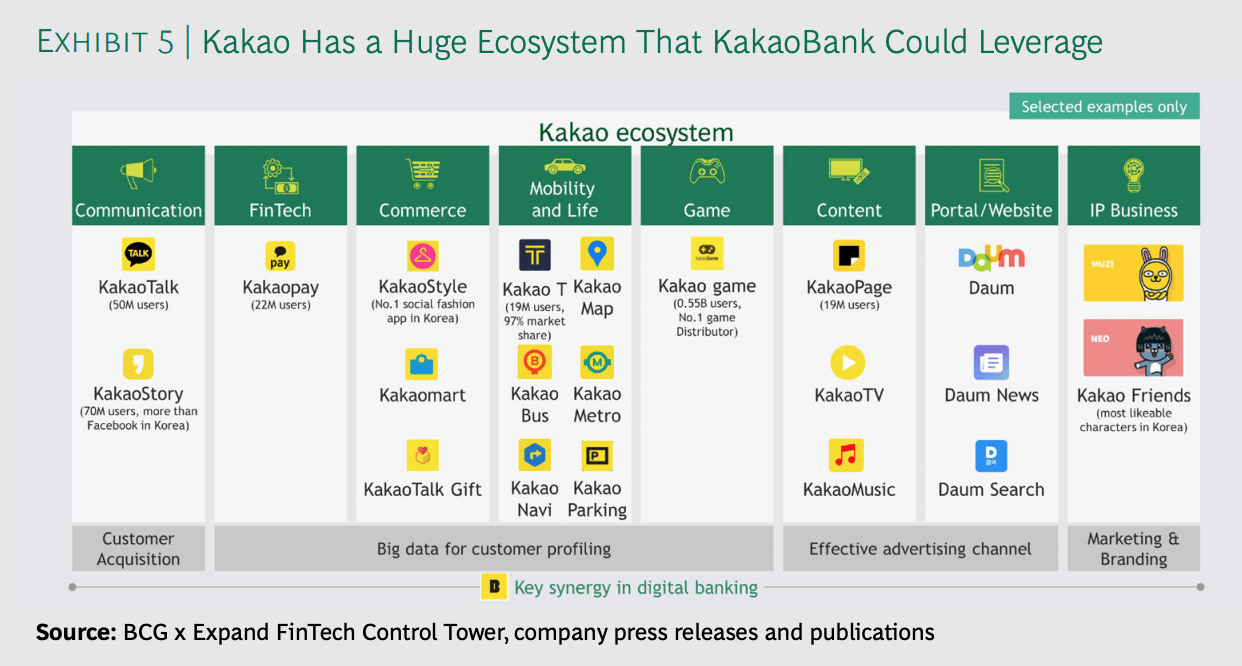 KakaoBank reported 113.6 billion won (US$101 million) in net profit in 2020, up eightfold from a year earlier. During the same period, operating profit and revenue spiked by over ninefold and 21% to 122.6 billion won and 804.2 billion won, respectively.

The company is now planning a domestic initial public offering (IPO) that’s likely to see its valuation surge to 20 trillion won (US$18 billion).

In China, WeBank has put a focus on reaching underbanked customers and blue-collar workers, which today make up about 75% of its client base, the BCG report says. Leveraging cutting edge technology including artificial intelligence (AI), blockchain, cloud computing and data, WeBank is able to optimize its efficiency, improve user experience and scale up quickly in a cost effective manner.

In 2019, WeBank generated US$570 million profit and served 300 million customers, making it the largest digital-only bank in the world.

While initially slow to react, traditional incumbents across Southeast Asia have ramped up their digital banking efforts as they seek to penetrate the growing market.

In Singapore, legacy operator United Overseas Bank (UOB) launched its TMRW digital bank in Thailand in 2019, which operates a mobile-first approach with a full suite of banking solutions. TMRW’s underlying tech architecture was built in-house, but it uses personalization capabilities powered by tech providers such as Personetics, Avatec.ai, and Meniga.

TMRW quickly gained popularity in Thailand, tripling its customer base in six months from August 2019 to February 2020. In August 2020, the digital bank expanded to Indonesia. It plans to roll-out across other markets in Southeast Asia in coming years.

In Indonesia, government-owned Bank Rakyat Indonesia (Bank BRI) has gone on a digital transformation journey, adopting a digital strategy that mostly centered around the smart use of cloud-based APIs.

This approach has provided the bank with automation and agility, allowing it to integrate seamlessly with platforms such as the Indonesian government’s ID database, offer automatic verification and onboarding, as well as tackle important fraud or identity concerns.

Bank BRI’s innovative digital strategy has seen it leapfrog fintech competition, with indications that it has achieved 70% financial inclusion across the country by the end of 2019.

Southeast Asia is undergoing a period of banking liberalization, with Singapore clearly leading the way. The Monetary Authority of Singapore awarded four digital banking licenses in December 2020. The four digital banks are expected to commence operations by early 2022.

In the Philippines, the central bank recently announced the granting of two more digital banking licenses. Tonik and UNObank are joining state-backed Overseas Filipino Bank, which got a license in March 2020.

Tonik launched its services in March 2021 under a previously acquired rural banking license. It claims to have secured over 1 billion pesos ($$20 million) in retail deposits in less than a month.

UNObank is run by Singapore-based DigibankAsia and uses technology provided by Mambu and Amazon Web Services.

Other companies are eyeing a digital bank license in the Philippines, including South African digital banking challenger Tyme, which has partnered with Filipino conglomerate JG Summit Holdings.

Malaysia plans to hand out digital banking licenses next year, while Thailand and Indonesia are readying their respective ecosystems to be able to grant full digital bank licenses.