More foreign businesses are buying into China despite political tensions

As global uncertainty escalates, more foreign businesses are buying into China, including deals in the more sensitive industries of finance and technology.

“Over the past 18 months, we have recorded levels of foreign M&A (mergers and acquisitions) into China that were not seen in the previous decade,” research firm Rhodium’s partner Thilo Hanemann and founding partner Daniel H. Rosen wrote in an online report released on June 18.

Most of that activity has been driven by American and European firms taking advantage of looser foreign ownership limits or betting on Chinese consumer demand.

The report said, “several months into the pandemic, the data tell a different story about cross-border M&A trends. There are no signs of a Chinese outbound investment boom, like the one seen after the global financial crisis a decade ago. Instead, takeovers are headed in the other direction: into China.”

Below are a few M&A trends listed in the report:

In the first five months of 2020, Chinese outbound M&A activity collapsed compared to previous years (Figure 1). So far this year, all companies in China combined have spent around the same amount on overseas acquisitions as HNA Group did in 2016 on one transaction – its purchase of a 25% stake in Hilton Worldwide Holdings ($6.5 billion). 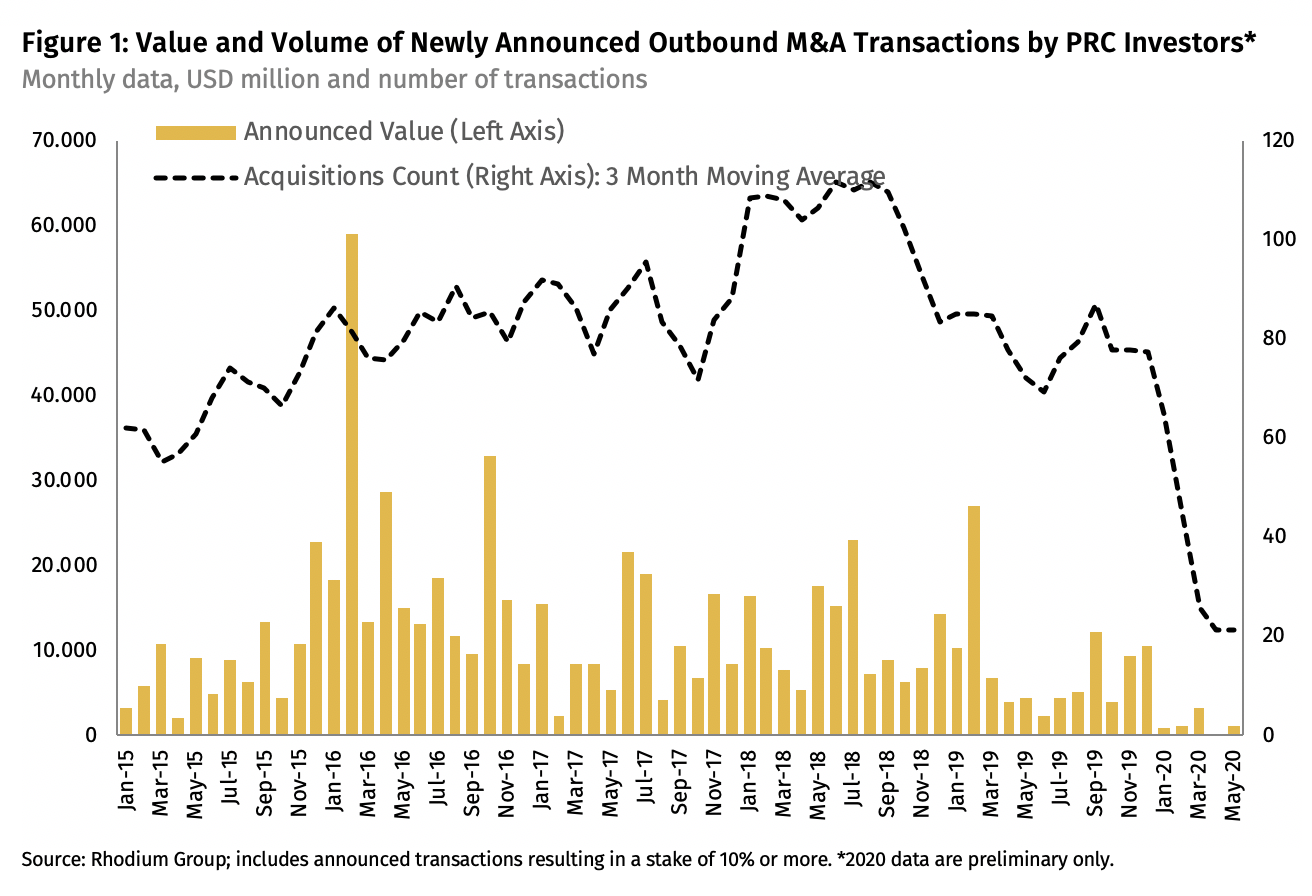 The COVID-19 outbreak has slammed deal-making in both directions this year. But flows into China have picked up every month since January. In the first five months of 2020, foreign M&A into China totaled $9 billion, surpassing Chinese outbound M&A activity in both volume and value terms for the first time in a decade.

Recent deals offer clues about what is driving foreign appetite for Chinese assets.

First, Chinese consumption. While consumption has taken a hit – as it has everywhere else – firms are still betting on the secular rise of China’s middle class. One example from 1Q 2020 is Pepsi’s $700 million acquisition of Chinese snack brand Be & Cheery.

Second, policy liberalization. Foreign firms are buying shares in their own joint ventures, after China lifted foreign equity thresholds. Volkswagen announced it would take control of its joint venture with Anhui Jianghuai Automotive Group in a $1.1 billion deal, and JP Morgan is acquiring full control of its Chinese mutual fund joint venture for an estimated $1 billion.

Third, Chinese firms have matured (through entrepreneurialism, industrial policy and other means) to become leaders in some industries. For the first time, therefore, it is attractive for foreigners to buy technology and industrial assets rather than build from scratch. Volkswagen’s plans to acquire a 26% stake in Chinese battery maker Guoxuan High-Tech for $1.2 billion is a prime example. 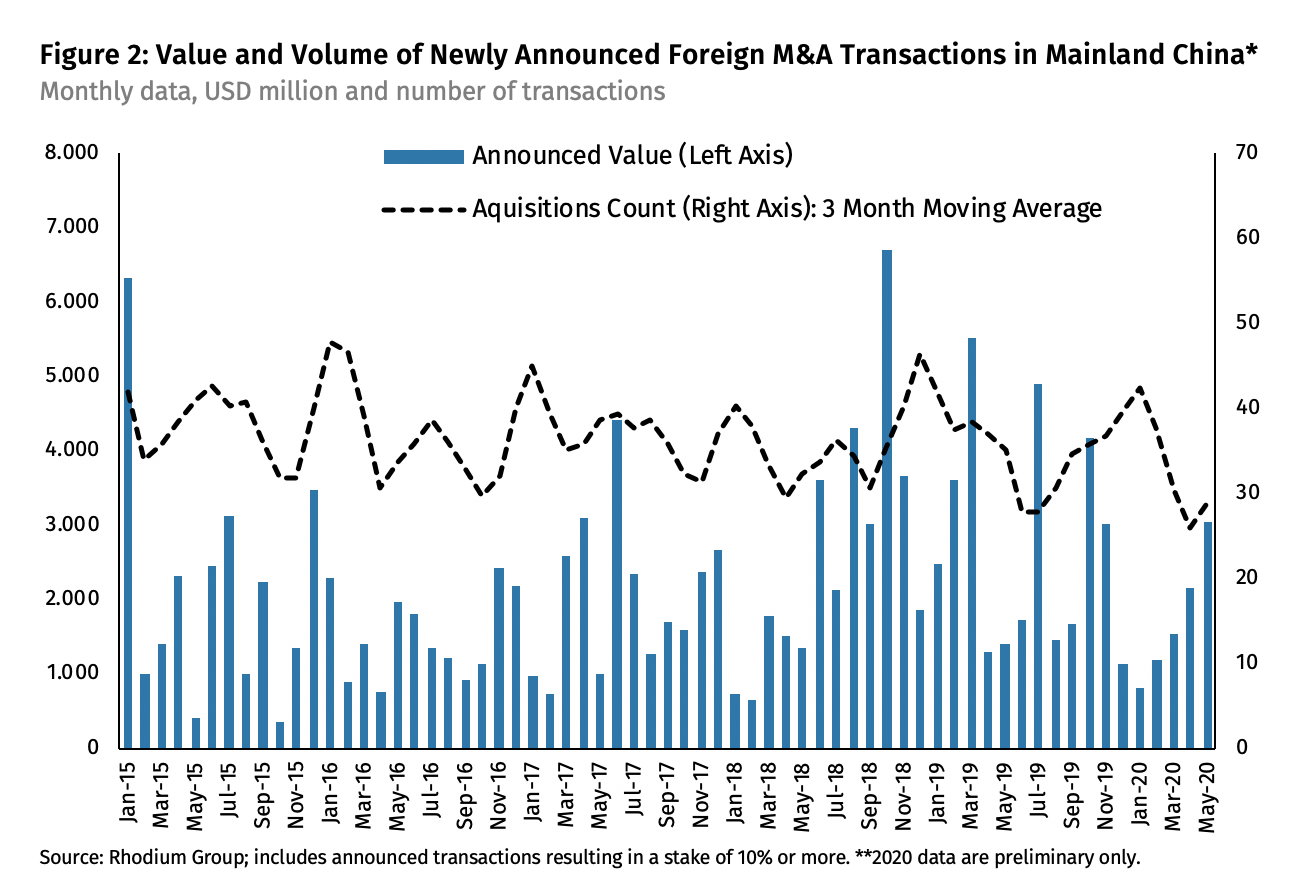 The trends that have emerged over the first five months of 2020 offer some valuable insights for policymakers grappling with China’s role in global cross-border investment flows.

First, reduced FDI flows will be a global reality for some time and China is no exception. China is not an exception and is experiencing diminished capital inflows and outflows.

Second, slowing Chinese outbound investment over the 2017-2020 period shows China’s rise as global investor is not inevitable. China’s future as a global investor depends on two factors: first, the successful implementation of policy reforms at home that have bedeviled leaders in Beijing for years; and second, foreign comfort with Chinese capital, a condition that has shifted starkly to the negative in recent years.

Third, foreign appetite for assets in China will remain robust, despite the chorus of political decoupling and economic re-shoring talk, as long as China represents a sizable share of global growth. Over the past 18 months, we have recorded levels of foreign M&A into China that were not seen in the previous decade. Most of that activity has been driven by American and European firms taking advantage of looser foreign ownership limits or betting on Chinese consumer demand.

For more details, please go to Rhodium Group at https://rhg.com/research/whos-buying-whom/.