Singularity Financial Hong Kong May 11, 2021– The U.S. House of Representatives on Tuesday approved a legislation, which would amend the Securities Exchange Act of 1934 to require publicly traded corporations to disclose diversity information about their boards of directors, nominees for the boards, and executive officers of the corporation.

The bill, introduced on Nov. 14 by Rep. Gregory Meeks (D-N.Y.) and cosponsored by Reps. Carolyn Maloney (D-N.Y.), Emanuel Cleaver (D-Mo.), David Scott (D-Ga.), and Gilbert Ray Cisneros Jr. (D-Calif.), would also require the Securities and Exchange Commission to report annually to Congress an analysis of diversity trends. The SEC would also have to establish a Diversity Advisory Group to work on initiatives to increase gender, racial, and ethnic diversity on corporate boards.

If the bill does become law, the SEC Office of Minority and Women Inclusion would also be tasked with publishing best practices for compliance with disclosure requirements on diversity. 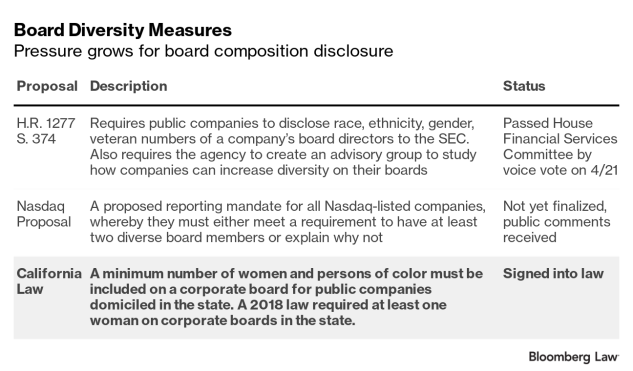 The diversification effort may get a boost from the SEC itself even without the legislation. Newly confirmed SEC Chair Gary Gensler said he asked agency staff to make recommendations about how to get companies to disclose board-diversity data.

Investors “increasingly want to understand these particular issues around diversity and more broadly human capital, both. And it’s driven by what investors want to see and I’ve asked staff to try to serve up some suggestions on this,” Gensler said at a May 6 House Financial Services Committee hearing, a committee where Maloney and Meeks hold senior positions.

A white paper issued by Institutional Shareholder Services (ISS) earlier this year noted just 10 percent of current board members in Russell 3000 companies belong to ethnic minority groups, although 15 percent of new directors are minorities. In 2019, 45 percent of new board seats were filled by women (compared to 12 percent back in 2008), but just 19 percent of all seats are held by women, according to “U.S. Board Diversity Trends in 2019.” The report noted gender diversity in some measure got a boost thanks to 2019 regulations in California requiring boards headquartered there include at least one female.